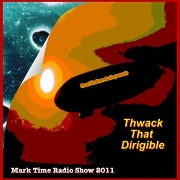 THWACK THAT DIRIGIBLE (COMEDY) A stolen dream-driven dirigible, an evil steam-powered spider and a styrofoam grail, all have the fair dream mistress Princess Doyle a la Carte and the decidedly bubbly Count Pierre d'Orc on the run beyond the overtaxed capacity of their Heisenberg Hyper Extended Reversal Dream Drive. Steampunk and other steam-like stuff take a bath in this Brian Price and Jerry Stearns satire.