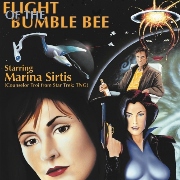 The struggle between the Amalgamation and the evil Consortium heats up as rebels assault the planet Quatro Cinco. Lieutenant Nancy Coy (Marina Sirtis, 'Counselor Troi',"Star Trek: The Next Generation") is assigned to rehabilitate Kurk Manly, once the greatest and most handsome startup pilot in the Galaxy, now reduced to a staggering drunk-and put interstellar kibosh on the rebellion. Deep dark plots, bone-rattling space battles,and rollicking Airplane-flavored humor combine with a wonderful original score to make this feature-length story a treat for the ears that will sweep you away.

Nominated for a Golden Headset Award!