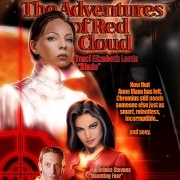 Wendy McCloud (Traci Elizabeth Lords) is ordered into Anger Management Therapy. But it's not much help when pirates murder her father, Planetary President of Chromius. Now that Anne Manx has left, Chromius still needs someone else just as smart, relentless, incorruptible...and sexy.

Telling Elaine (Brinke Stevens), Wendy abandons her career in the oldest profession for a new job: spy! Going underground as "Red Cloud," she infiltrates the inner circle around vicious Jake Bloom (James Leary), the greediest outlaw in the sector. "Red" risks her life to avenge her father and end a reign of terror engulfing the whole quadrant.

Red blasts headlong into a tight orbit of action, caught in a terrifying nebula of deception, sex, robbery, extortion, torture, mass murder, and even (dare we say it?) insurance fraud.