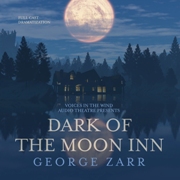 FINDING HIS VOICE (SUSPENSE/ MYSTERY) Well hidden among the trees along the tranquil waters of Lake Waseosa sits the Dark of the Moon Inn, an unsettling 19th century bed and breakfast where unsuspecting guests attempt to unwind from the trials and tribulations of everyday life. Instead, they find themselves veering towards that place where wandering minds cross into the darker and stormier depths of the all-encompassing nighttime.

THIS EPISODE: The voice-over business intensifies into a deadly game of cat and mouse between three people. The hunter and the hunted crisscross through the worlds of film, radio and television – until everything ultimately depends on the sound of a single voice.