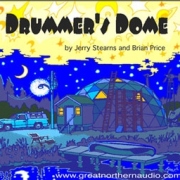 Drummer Crowley is finally able to build the house he always dreamed of, a geodesic dome in the woods. That's because they finally released on CD the three albums his band, Bent Sunshine, made back in the Sixties. So he's enlisted his son and daughter-in-law to help, and hired a carpenter. But now they are finding that the inside of the dome seems to somewhere else, Drummer is feeling better than he has in years, and that carpenter, well, she's starting to look awfully cute.